A Woman To The Last

It was August and balmy. We were at the Sherwood Inn in Skaneateles, New York − an old stage coach stop, preserved in this upscale Finger Lakes town as a meeting place for young and old, single and married and yes, even widowed. My father had died the last day of June the summer before. I was here on this Friday night with my mother, attempting to help fill her companionless evenings. We were served dinner in the pub part of the restaurant with my friend Cheryl.

Cheryl and I had been blessed with over twenty years of friendship and laughter. Over the years, Mother had played a role as sage and counselor for Cheryl and her sister Pat, as they escaped some of their father's 'craziness'. At one point, when they came in search of refuge, Mother calmed them, sharing what was news to me: her own husband's 'crazy moments'. She talked the girls through what she called 'male menopause' telling them it could be survived. 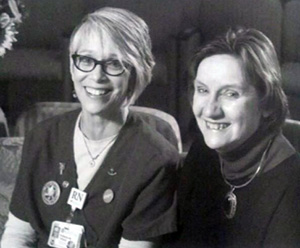 "This is Kitty," head nurse Gail said to me. "She'll be your chemo nurse." I'd chosen to have chemo first to shrink the invasive ductal tumor in my right breast that threatened my life. I was shaking and hardly breathing. Putting up a brave front, I followed Kitty who led me to a chair. I kept my eyes averted. There were lots of people in chairs around the room, people getting chemo. I was too scared to look.

"So what books are you reading?" Kitty asked once I settled in the chair. She proceeded to wheel around me on a small stool, bringing trays in place, oozing competence. "Name All the Animals," I said. I saw Kitty's brown eyes widen behind her stylish, black frames. "The one by Alison Smith?" she asked. I nodded. "That's the story of my life," she said as she pulled her stool in front of me. "My brother died when I was sixteen. Just like in her book." I felt my breathing return, my curiosity replacing my fear. I remembered the death that changed Alison Smith's life forever, her parents so lost they forgot about the daughter.